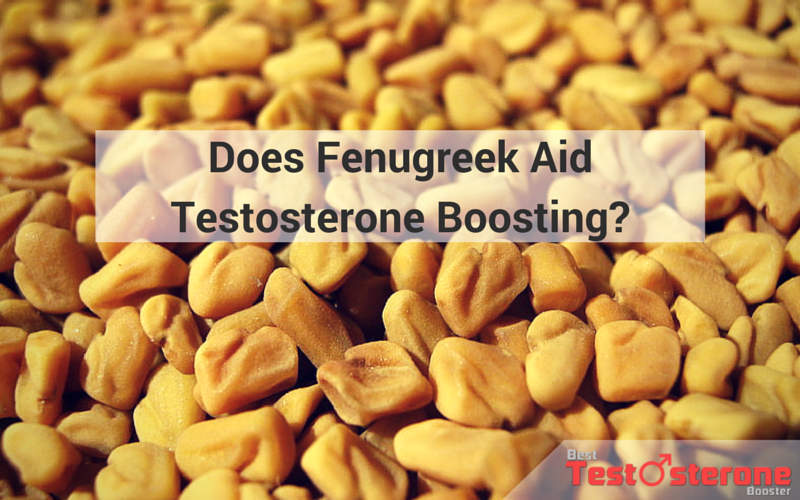 Testosterone is a male hormone essential for building muscle mass. Even if building muscle mass is not a primary goal for many, majority of the men seek to raise their T levels for various reasons and some researches claims that this could now be achieved with the help of a herb called fenugreek.

In addition, maintaining the levels of testosterone hormone plays an important role for a range of other benefits that includes increased energy, potentially enhanced athletic performance, well-being and increased libido.

There are several supplements out in the market which helps in increasing your testosterone levels along with enhanced fertility and muscle development. For those who aim to boost their testosterone, these added benefits are really an icing on the cake.

Athletes, body builders and anti-aging enthusiasts always prefer natural techniques to increase performance or even pull-in hormone production. According to some of the recent researches, it is claimed that the herb Fenugreek plays a vital role in increasing testosterone.

With lots of websites providing information (some of which are even selling different versions of it), we hope that you will appreciate this informational post.

Even though the studies conducted on the use of this herb for boosting T levels is limited, it is observed that the compounds known as furostanolic saponins will stimulate the production of testosterone.

As the level of testosterone declines normally with age, many opt for these kinds of natural remedies for health benefits. Some of the promoters even claim that increasing T levels via fenugreek supplements provide you with various health beneficial effects such as:

Fenugreek, meaning ‘ram’s horn clover’ is used mainly for medicinal as well as culinary purposes. It is a well-known herb in India and Arabic regions, which is commonly included as a spice in many Indian cuisines.

Even though they are traditionally popular for boosting masculinity and libido, the herb is also utilized to lessen blood sugar metabolism problems such as diabetes. It’s no wonder that the lion share of Fenugreek on the market comes for the home of Ayurveda, India.

[quote bcolor=”#2eb2db”]Some of the major health benefits of Fenugreek:

Fenugreek, the testosterone booster includes 5-alpha reductase inhibitors that helps prevent testosterone from being converted into DHT (dihydrotestosterone). As a result of this you can see:

On the other side, increased usage of this supplementation may cause urine and sweat to smell like maple syrup due to the presence of a metabolite known as sotolon.

Till date there are no reputable researches which deal with the effect of fenugreek on T levels. As per the records, the link between fenugreek and testosterone was researched by Richard Kreider, a Texas A&M professor, who has got a fitness-related nutritional background.

The post which was published in the International Journal of Sports Medicine clearly pin points that it could neither prove nor disprove any health claims. Besides this, there are hardly any researches done on this topic.

[quote bcolor=”#2eb2db”]In order to support the link between boosting T levels with fenugreek, researchers conducted a study on 30 young male subjects for around eight weeks by administrating 500 mg capsules of fenugreek or a placebo under supervised exercise regime.

The extract of fenugreek was provided by the Indus Biotech of India and has been standardized for ‘grecunin’.

During the study period, it was noted that those male subjects who were given fenugreek was observed to have free (bioavailable) and total testosterone levels increased by 12.26 percent and 6.57 percent respectively.

In addition, DHT and Estradiol levels also increased around 6.10 percent and 26.6 percent (not of much importance). On the other hand, placebo group didn’t throw any noticeable changes.

On this ground, the researchers concluded that estradiol levels alleviated to around 9.64 percent from week 0 to week 4 before increasing above the baseline values by the end of 8 week study period.

The team came to a conclusion that, since there was a considerable increase in bioavailable and total testosterone levels without an equivalent level of increment in DHT and estradiol levels, the extract of fenugreek successfully (but incompletely), inhibited 5-α reductase and aromatase activity.

Also changes to the body composition were noted by the researchers. Even though the extracts of fenugreek did not alter fat-free mass, those subjects who received it had experienced a decline of fat mass by 1.77 percent vs. 0.55 percent among the placebo group. [/quote]

Based on the study reports, researchers commented that all those who look out for testosterone booster in local sports supplement store should keep the following in mind:

[quote bcolor=”#2eb2db”]The aromatase inhibitors promoted by the giants in nutritional supplement industry claims that though their products help in boosting androgen levels in human body similar to the anabolic steroids, it suppresses levels of estrogen simultaneously.

The recent reports, along with the previous research conducted by Willoughby during the year 2007 supports this theory to some extent. This is due to the fact that there was an increase in bioavailable as well as total testosterone along with slight variations in estradiol and DHT. [/quote]

On the contrary, the reports clearly points out that elevation in the levels of endogenous testosterone might not always lead to increased muscle hypertrophy and strength.

Also, as per the studies, increased endogenous testosterone levels due to the administration of the experimental supplement didn’t show significant effect on the interaction between the androgen receptor and testosterone or on the androgen-receptor expression.

This theory explains the reason behind why strength and fat-free mass didn’t increase much in the PL group during the course study. It supports the notion that higher T levels within physiological levels hardly have any influence on muscle strength in young men who are strength-trained.

Factors to Be considered While Taking Fenugreek

Dizziness, diarrhea, reduced blood sugar levels and gas are some of the most common side effects of consuming fenugreek. It is also noticed that fenugreek may lower potassium and therefore heart patients are strictly advised to avoid fenugreek supplements.

Apart from this, in certain cases, it is noted that decreased levels of testosterone may lead to various underlying health issues like depression, thyroid disorder etc. Therefore it is recommended not to consume this supplement without consulting your health care provider.

People who are allergenic to peanuts, coriander and chickpeas should avoid it owing to possible cross-reactivity. Also, iron deficiency anemia people should not take these supplements since it decrease iron absorption rate.

Although fenugreek supplements are still hyped up in the world of bodybuilding, it is really important to remember that these kinds of supplements were very minimally tested for safety.

It is noticed that, the product has at times delivered dosages that deviates from the specified amount. While in some other cases, the product may be mixed up with certain metallic compounds.

[quote bcolor=”#2eb2db”]In order to reap maximum benefits from natural testosterone, one should ensure that androgen levels are converted naturally into a more potent form, dihydrotestosterone.

Fenugreek supplements works by slowing down this conversion, which in turn produces more amount of testosterone hormone to the blood serum beyond the level which could be converted to DHT. And this is not a good sign for bodybuilders.  [/quote]